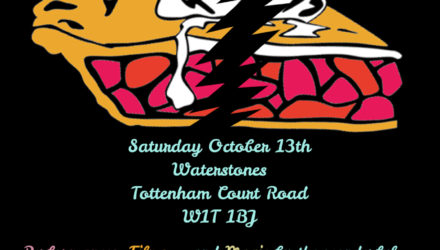 This will be the twenty-second ‘Strange Umbrellas’. We’ve presented them all over London in very varied venues and also done a couple in Berlin. Each show consists of short and very contrasting acts, involving music both experimental and more conventional, film and video of all types, short lectures and other stuff.

As it’s our first time at Waterstones, we’ve come up with an extra special programme.

Katy Carr has produced several outstanding CDs of songs in both English and Polish. On this occasion, she’ll be accompanied just by her excellent ukulele playing.

Jack Goldstein will produce a new work in collaboration with musician Jonah Falco.

Mandhira De Saram – virtuoso and first violin of the Ligeti Quartet – joins Steve Beresford in a new phase of their ongoing duo, in which he puts aside the piano and plays electronics and objects.

The event will feature a newly commissioned short act by magician Jon Armstrong.

In the film/ performance section there will be new works by Karel Doing and Pierre Bouvier Patron, plus a unique live soundtrack to the short film (Fe)(Male) by Linda Fernstermaker, with performances by artists Blanca Regina.