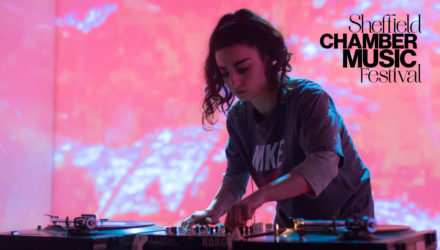 In the surround sound of the Crucible Studio, Shiva Feshareki will use her trademark turntabling techniques to manipulate music, from classical to club, into new forms using only the original vinyl material.

Shiva Feshareki is an internationally recognised experimental composer and turntablist and NTS radio DJ. She has collaborated with the London Sinfonietta, London Contemporary Orchestra (at the BBC Proms) and BBC Concert Orchestra. In 2017 she was awarded with the British Composer Award for innovation from BASCA.

Shiva’s debut LP, NEW FORMS (released in February 2019), is a snapshot into her turntabling experiments: A sonic exploration of perspective and context, demonstrating how one idea can have numerous perspectives of opinion, extension, complexity and interpretation. Listen here.