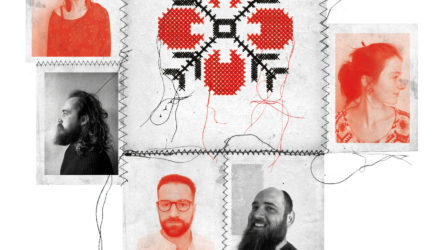 FREE FOLK IN BREXIT BRITAIN Two of the world’s most prominent avant-folk ensembles join forces for a joint headline tour of the UK.
It’s not often that you can say you met someone over a meat cleaver but in the case of Dead Rat Orchestra and Sutari it’s true. Not that anyone who knows the work of the UK’s DRO – or for that matter, Poland’s Sutari – should be surprised. Kindred spirits not only in their approach to free-folk but in their use of unusual objects – including meat cleavers – in their performances, this tour will see them join forces to explore the cultural impact of Polish and European migration in England. Performing in locations across England that have been nexus of Polish immigration, and engaging with British, Polish and European communities in these areas, the tour will utilise Sutari and DRO’s unique approaches to performing traditional musics to lead audiences in a performative and timely discussion about the cultural impacts of the UK leaving the European Union.
Polish and British Free Folk will also be the subject of a BBC Radio documentary to be aired later this year. The programme will chart the bands’ journey through these communities, highlighting the cultural issues surrounding the UK’s decision to leave the EU.
Sutari and DRO are starting a seven date tour on 10th July in Colchester MORE DETAILS HERE and perform for us at the Holywell Music Room on Monday 16 July.