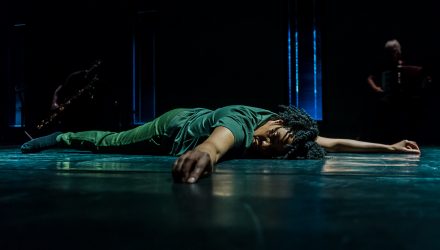 Acclaimed vocalist and movement artist Elaine Mitchener gives the London premiere of SWEET TOOTH.
This ambitious cross-disciplinary music theatre piece uses text, improvisation and movement to stage a dramatic engagement with the brutal realities of slavery as revealed by the historical records of the sugar industry and to reveal its contemporary echoes.

The work was premiered in November 2017 at Bluecoat, Liverpool’s centre for the contemporary arts and later broadcast on BBC Radio 3’s Hear and Now programme on 30 December 2017.

SWEET TOOTH has been supported with public funding from Arts Council England. Commissioned by Bluecoat in partnership with the Stuart Hall Foundation, London and The International Slavery Museum with further support from PRSF Open Fund, Edge Hill University, Centre 151 and St George’s Bloomsbury.