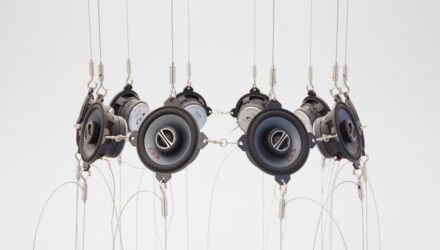 The Cyclical and The Linear

The Cyclical and The Linear is a new speculative performance made for live broadcast by Sound artist and composer Kate Carr. Commissioned by TACO! and the Outlands Network, the piece will be broadcast as part of the Joyous Thing #2, a 2 day festival of experimental music.

In the gallery space at TACO! Carr has installed a bespoke, sculptural instrument made from taut wires , transducers and contact mics, which she will use to perform an improvised composition for camera.

The performance will be broadcast live via the Outlands Network online platform.

Kate Carr is a London based Australian artist whose work is is grounded within the practice of field recording. Using microphones Carr finds sounds within a body of water, the internal vibrations of a building, or the rumbling noises deep within the earth, which she then uses in thoughtful ambient compositions, that blur the boundaries between instruments and ‘found’ sound.

Kate Carr has exhibited and performed Internationally. Her audio work has been broadcasted and presented on Radio 6, Late Junction and she has performed lives at International platforms such as MazerMuski Festival – Berlin, Sonorities – Belfast, Café OTO and the Horse Hospital – London and Norðanvindur sound art festival, Iceland. Her work has been shown at galleries including the Museum of Contemporary Art Sydney, Australia, the Kochi Muzaris Biennale – India, and Transition- Mken, Sweden. In 2018 she presented her installation Under Construction at TACO!