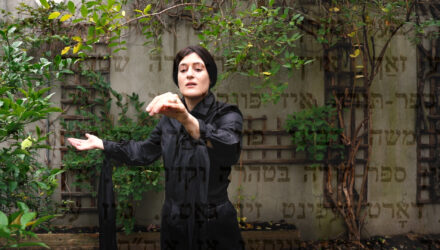 An evening of live music by mezzo soprano Clara Kanter and pianist Ben Smith set against the backdrop of a new film cantata that celebrates the intersection of Scottish and Yiddish culture.

In 1923, Sholem Asch’s play God of Vengeance caused controversy on Broadway for depicting scenes of ‘obscenity’. In 2017, Indecent – a play inspired by this controversy – won two Tony Awards (including best direction). Now, Sholem Asch’s great-great granddaughter Clara Kanter brings a brand new work inspired by God of Vengeance to JW3, in an evening of music, film and poetry.

This screening will be presented alongside a world premiere of a new work by the cantata’s composer, Alastair White, with a selection of other pieces in a celebration of the Yiddish and Scots languages.

The Drowning Shore is part of Tsitsit Fringe, the world’s first Jewish themed Fringe Festival, happening across London and the UK throughout October 2021. For the full programme, see https://tsitsitfringe.org/

“Breathtakingly beautiful and rather haunting” – The Shmooze