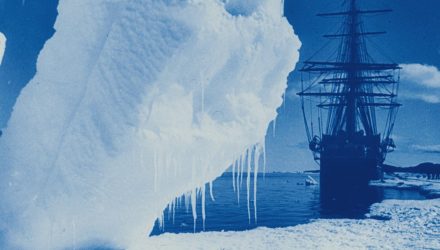 The Great White Silence is a 1924 English documentary about the Terra Nova Expedition of 1910–1913, portraying expedition leader Robert Falcon Scott, his men and his ship, the Terra Nova, as they leave Lyttelton, New Zealand, to sail into the Southern Ocean and its ice floes.
The principal filmmaker was Herbert Ponting, the first known photographer to take a cinematograph to the Antarctic continent. He follows the men as they set up tents, practice skiing, and prepare to probe southward toward the Pole. Scott did not choose Ponting to accompany him on his tragic onward journey and he remained on base, survived with his film sequences and eventually returned to England.
Non-Blank are Oliver Cherer, Jack Hayter, Riz Maslen and Darren Morris. They return to Kino-Teatr after their success with a live soundtrack to The Cabinet of Doctor Caligari. They perform semi-improvised suites of music based on recordings, schemes and strategies made and devised in and around various locations, collections and libraries of sounds, using old tape machines, organic, analogue and digital instruments and voices.