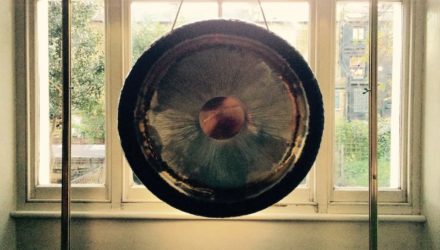 The Listening Body is a new collaborative project by sound artists and musicians Steven Mclnerney and Pascal Savy. Together they seek to investigate alternative ways of presenting their drone work and question the relationship between performer and audience in the context of the space in which sound and music are experienced.

The project stems from their respective practices of performing experimental music in traditional and less traditional concert venues, where the divide between stage and audience enforces the expectation of a spectacle that more often that not fails to materialise. With The Listening Body they seek to dissolve the binary nature of the concert space by asking the audience to lie on the floor and cover their eyes with sleep masks, as their sound work will be diffused throughout the room. In doing so they hope the audience can use the entire bodies as resonant sensors and reclaim the here and now of the performance as a space for direct and felt experience.

Steven Mclnerney will lead a Sonic Meditation using ancient and contemporary techniques with Gongs, Singing Bowls and other Idiophones.

Pascal Savy will explore the interaction between sound, body and physical space with a new minimal composition at the intersection of drone, ambient and noise music diffused on a large quadraphonic sound system, and will seek to investigate the possibilities of experiencing sound where the entire body can act as an extended listening device triggered by the resonant properties of the room in which the work is presented.