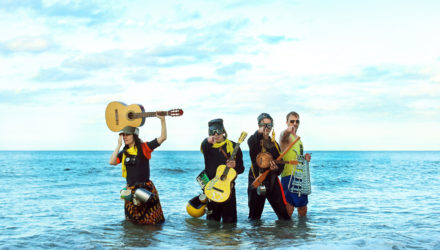 Art-rock mavericks The Neutrinos have over 100 sell-out London Royal Festival Hall shows under their belts with their critically acclaimed KlangHaus show. They’ve performed in New York, around Canada and mainland Europe as well as numerous UK dates. Now they are set to return their ‘sexy urgent energy’ (Time Out New York) to their spiritual home at Norwich Arts Centre

Hailed as’ total game changers’ by The Guardian and ‘truly outstanding’ by The Daily Telegraph, The Neutrinos will be celebrating the preview release of their new single Pulse Addict. This is set for 2020 release, but limited edition 12” vinyl copies will be exclusively available at the show.

The band are renowned for their experimental approach to presentation and will be utilising their unique sense of style and occasion to create a unique atmosphere.

Today The Neutrinos are perhaps best known for their groundbreaking, site responsive KlangHaus collaboration with artist Sal Pittman. Described as ‘the most innovative presentation of live music I’ve ever seen’ by The Guardian and as ‘A blast of aural and visual magic’ in a five star review Times review, KlangHaus debuted in a month long run at the Edinburgh Festival. The show transferred for two, site specific month long, sold out residencies at The Royal Festival Hall and to other venues around the country. The show is reborn and inspired by each building they perform in.

Their irrepressibly adventurous nature has led them to perform on boats, in complete darkness in an art gallery, in a former horse hospital, a bus depot and a disused animal hospital