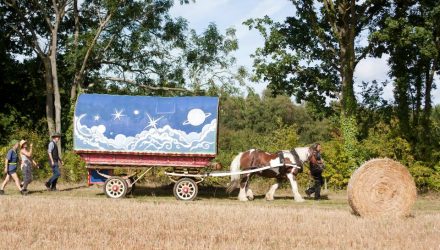 Sabotage Theatre returns to the festival in collaboration with Bridgetower Music (making their festival debut) in this new, fully staged and exciting production of Stravinsky’s trail-blazing music theatre masterpiece, The Soldier’s Tale, 100 years since it was first performed. Sabotage Theatre and Bridegtower Music bring comic chaos, showmanship and shadows to a modern fable that will appeal to all ages. With Stravinsky’s magpie genius for musical styles, we hear tango, ragtime, waltzes and Bach chorales, all mixed within a savage folk tale where the Devil has, quite literally, all the best tunes!
A soldier returning from war strikes a deal to sell his battered old fiddle to The Devil on a promise of ‘wealth untold’. When he later discovers he’s been cruelly tricked out of everything he holds dear, he sets out on a new path. But can a real trickster really be tricked? News of an ailing princess spurs him on. But does he hold the power to rebuild his life and regain the peace and happiness he so desires? Or has a war dance only just begun?
A virtuoso group of soloists and a ragged troupe of actors come together to show one of the definitive works of the twentieth century.