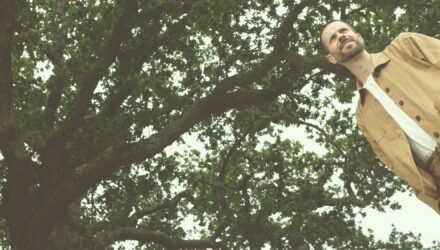 After many years recording and performing with a string of musical talents including Amy Winehouse, Kano, Gabriels, Joy Crookes and MF DOOM, London-based composer and producer Sam Beste embarked on his debut solo adventures as The Vernon Spring in 2021.

Described by Radio 1’s Benji B as ‘an amazing record’, debut album A Plane Over Woods has been making gentle yet seismic waves and was recently followed by What’s Going On  an ambitious and audacious response to the seminal Marvin Gaye album of the same name.

In addition to performing material from these albums, Sam Beste will also be unveiling music from Earth, On A Good Day a new project featuring vocal and musical responses to material by The Vernon Spring.  The seed for this was sown when out of the blue, Sam received an adaptation of one of these songs from the artist Ghostpoet.  Coincidentally, two weeks later Beste received another adaptation, this time from new artist ‘aden’, again featuring The Vernon Spring’s instrumental overlain with stunning vocals. Something was forming in the ether, it seems, and a series was born. Beste continued to collaborate with other artists and these recordings will be released this year as Earth, On A Good Day, culminating in a live performance here at Kings Place .

Bendik Giske (NO) is an artist and saxophonist whose expressive use of physicality, vulnerability and endurance have already won him much critical acclaim.

COLECTIVA explores the spaces between Afro-Latin music and Jazz while reflecting on themes of sisterhood and female empowerment.