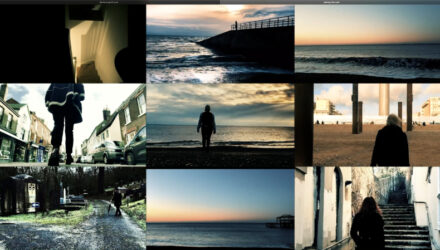 Unable to meet and sing in person together, rehearsals for The Distance Between Us took place over the autumn and winter of the second period of lockdown. 130 people joined from Norwich and Brighton as well as from Ireland, Spain, South Africa and the USA. All members were given instruction in recording audio and video.

All the music has been written specially by composers Sian Croose, Orlando Gough and Jonathan Baker. The Voice Project is renowned for an innovative approach to choral performance, with music, poetry and choreography combining to give audiences a unique, uplifting experience.

Voice Project directors Sian Croose and Jonathan Baker invited award-winning poet Esther Morgan to work with the singers to encourage them to write poetry and imaginative journals for inclusion in the film. The also brought in movement director and dancer Dane Hurst, currently artistic director of Phoenix Dance Theatre who has also worked with Ballet Rambert and many others. Dane led movement sessions, for choir members as well as choreographing and performing his own section of the film.

Sian and Jonathan worked alongside Dane Hurst, art director Sal Pittman and videographer and editor Nathan Clarke to make The Distance Between Us into a film that records a very unusual time in all our lives; one that connected people across distances and found the choir singing together whilst apart.

‘We’re really proud of the film and that we managed to create something that reflects people’s experiences when we couldn’t physically get together to sing’ said Voice Project co-Director Sian Croose‘.

Founded in 2008, The Voice Project is an open access community choir, absolutely anyone can join, from the complete beginner to the experienced performer. As well as learning the new music written for each project, choir members attend sessions in vocal technique and performance skills so that after 3 months the choir is ready to present highly crafted work.

The Voice Project Choir has performed new commissions at Norfolk & Norwich Festival appearing with significant guests from the jazz and contemporary music fields. They took their groundbreaking show The Arms of Sleep (which involves a sleepover for the audience) to the Brighton International Festival and have appeared at The London Jazz Festival and at the Jazz Sous Les Pommiers Festival in France. Guest musicians and composers have included Andy Sheppard, Orlando Gough, pianist Gwilym Simcock, Switzerland’s Nik Bärtsch, French musicians Trio Zéphyr, Norway’s Arve Henriksen and the late American trumpeter Jon Hassell (also a collaborator with David Bowie, Brian Eno and David Sylvian). The choir has featured on TV on BBC 1 and ITV, on prime-time French television and broadcast on BBC Radio 3 and Radio 4.