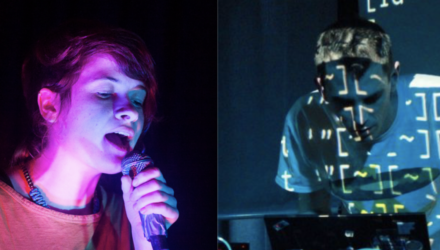 The stream will start with a new performance collaboration between vocalist Eimear O’Donovan and live coder Alex McLean, developed over the last months where lockdown allowed, where Eimear’s voice is entangled with live synths and live coding. This semi-improvised piece will be the first performance from their collaboration, where Alex samples Eimear’s voice, transforming it through code, while Eimear shapes the music through live controllers, creating balance between the different vocal, instrumental, and algorithmic elements. You can read about how they’ve developed their collaboration here: http://iklectikoffsite.org/tidalcycle-superdirt/

Afterwards Alex McLean will do an introduction to his free/open source TidalCycles live coding system, focussing on the new features that he developed during the [IN:SIGHT] residency period, including improved support for isorhythms and syncopation. Come with your questions about TidalCycles and live coding and he will answer them live!