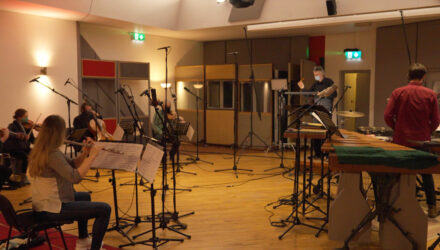 The Acts of the Apostles, the book that directly follows the Gospels in the New Testament, has a moment of high drama early on. Those dozen individuals, bereft of their leader, are gathered in the same room, which suddenly fills with the sound of a “rushing mighty wind”, as the King James Version has it. “And there appeared unto them cloven tongues like as of fire, and it sat upon each of them. And they were all filled with the Holy Ghost, and began to speak with other tongues, as the Spirit gave them utterance.”
This word “tongues” (glossai in the original Greek) comes twice in these two sentences, denoting tongues of fire and tongues as languages – other languages, as they are, making that room suddenly a microcosm of the world, and prefiguring how the fire-tongue-crowned apostles would go out and carry their message to all parts of the globe.
Kevin Volans takes off from these images of divine flame and worldwide conflagration in this piece, in whose title he has the tongues of fire jumping across to Spanish, perhaps partly because he spends part of each year in Spain, but perhaps also because the Spanish word “lenguas” has the tongue lolling lazily and even lubriciously within the mouth, in contrast with its abrupt pull-back in “tongues”.
Crisp and active, though, the music certainly is. Except for brief patches where the note values stretch out, the entire two-movement work goes at high speed, driving, as so often in Volans’s music, on the slightly bent wheels of misalignment and inexact repetition. The first movement, whether racing forward or running on the spot, is generally quiet or very quiet. Exceptions come when notes are emphasized as they start, as in the initiatory ascents the flute makes (a gesture to be repeated soon and later).
The flute, we might note, is the one instrument here that involves use of the tongue, not least in the technique of fluttertonguing, introduced almost at once in upward flurries at extreme high speed. Other instruments in this beginning part of the piece shadow the flute, whether allowing some of its notes to hum on (vibraphone at the start), reversing its line (first violin at the start) or imitating it (second violin a little later). So the music continues – except that the strings quickly introduce an idea of their own, regular pulsation, which pulls the flute into its thrall and opens up a contrast to be developed right through the composition, between reiteration, often at different simultaneous speeds, and jet-stream advance. There are places where the tongues of fire lick in excited alternation between the flute and the first violin, but eventually the flute falls silent as the musical space opens out towards the second movement.
There is no break at this point, only the introduction by the cello of a new pattern, from which a more continuous drive gets going. The alternations of flute and first violin return, before a more spacy middle section, and the work retrieves other ideas from its past on the way to closing at a high pitch. (Paul Griffiths, 2021).