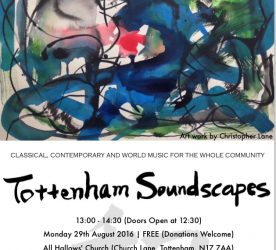 ‘Tottenham Soundscapes’ is a music project that offers an accessible alternative to conventional classical music concerts. With ‘community spirit’ at its core, we will showcase an eclectic mix of classical, contemporary, worldand the avant-garde within an all-embracing atmosphere. The event is free, so please come along and experience the unknown!

♪Walk through the historical paths of Tottenham, and discover a world of music within London’s hidden gem. The surrounding area is a perfect accompaniment for an informal lunch time concert with a twist! ♪

★Our Space★
All Hallow’s (Tottenham’s oldest church) is situated in the most picturesque part of Tottenham, North London. The 12thcentury stone exterior, together with its eight bells,medieval arches and working organ, help provide the community with a place of worship and creativity. Away from the hustle and bustle of inner-city life, this heritage area makes for a serene oasis, rivalling that of Highgate and Hampstead.
Catch the 243 or 123 bus to be dropped close by, or enjoy a leisurely walk from either Bruce Grove or White Hart Lane train station.

♥Our Area♥
Undiscovered and untouched, the surrounding area will appeal to those who are looking for new attractions to explore. Enjoy a leisurely walk around Bruce Castle Park, pop into Bruce Castle museum for a spot of culture, or enjoy a warm atmosphere and real ales at the Antwerp Arms, north London’s first community pub!
♪Enter Tottenham’s oasis of calm, heritage and culture, and experience a diverse musical programme at London’s best kept secret!♪

★Our Producer & Organiser★
Born in Tottenham and spending the last 10 years in Japan, music-maker, sound artist, producer and returnee resident Verity Lane is working in conjunction with All Hallows’ Church to create a diverse music programme for the Tottenham community.
Mentored by the late Indian composer John Mayor, she attended various prestigious music schools and orchestras, including the Junior Royal Academy and Guildhall School of Music and Drama. She completed a BA Hons in Japanese and music at School of Oriental and African Studies (SOAS), and won an award by JASSO to study at Osaka University, Japan. She then went on to complete an MA in composition at Osaka College of Music. In her ten years of living in Japan, she gained experience in organising numerous events. Recently, two pieces from her ‘3 Summer Pieces’ for bass koto(Japanese harp) were premiered on BBC Radio 3’s ‘Late Junction’.
https://soundcloud.com/verity-lane

★Our Musicians★
Liam Noble is a London-based jazz pianist, composer, educator, and recording artist. He read music at Oxford University, soon after completing a course in Jazz at the Guildhall School of Music and Drama. Noble has recorded and released several albums through Basho Records, including the acclaimed ‘Close your Eyes’ (1994), ‘In the Meantime’ (2001), ‘Romance Among the Fishes’ (2004), and ‘The Madness of Crows’ (2011). As well as collaborating with various notable musicians such as Christine Tobin, Marc Ducret, and Okkyung Lee, Noble is also an outstandingcomposer- his song cycle based on Japanese death poetry (commissioned by Birmingham Jazz) garnering much attention. As well as being a successful recording artist, Noble holds acclaimed teaching posts at both Birmingham Conservatoire and Trinity College of Music.

http://www.liamnoble.co.uk/
Sylvia Hallett is a Tottenham-based multi-instrumentalist and composer moving between violin, Norwegian Hardangerfiddle, saw, accordion, electronics and found objects. She currently plays with The London Improvisers Orchestra and h2dance company, where she is resident composer. Recent collaborators have included Lol Coxhill, Evan Parker, David Toop, Jah Wobble, Anna Homler, LaXula, Opera North, Wonderful Beast, Miranda Tufnell, Eva Karczag, and The Royal Shakespeare Company. She performs internationally as a solo improviser, having released three solo albums, and pops up regularly on the soundtrack of BBC TV’s Silent Witness. In July 2015 she was commissioned by the Livio Felluga Wine Company to create and perform a solo site-specific work on a hill in an Italian vineyard.
http://www.sylviahallett.co.uk/biography.htm

Clive Bell is a Tottenham-based shakuhachi, flute player, and recording artist. While living in Tokyo, he studied the shakuhachi (bamboo flute) under the tutelage of the legendary performer, Kohachiro Miyata. He is an expert in Japanese music, and gives regular lectures, workshops and performances on this subject around the UK and Europe. He has collaborated with a multitude of world-class musicians, and appeared on an array of recordings spanning different musical genres, including the soundtrack for the last two Harry Potter films. He also writes regularly for the music magazine ‘The Wire’, as well as being a prominent figure in the contemporary, improvised, and experimental UK music scene.
http://www.clivebell.co.uk/news_l.htm