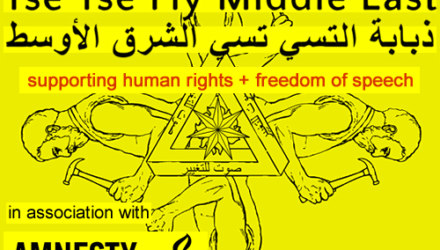 On June 2nd – as part of Fringe Arts Bath – Tse Tse Fly Middle East will pitch camp at the Walcot Chapel in Bath for a one-off night in association with Amnesty International as part of the venue’s LIVE offering. The event will start with a selection of short films curated by Tse Tse Fly’s Emir Nader featuring the likes of Joseph Adel and Saeed Taji Farouky. Emir is a journalist who’s worked in Egypt, Morocco, Cuba and Somalia, and is currently working for BBC Arabic and the BBC World Service. The films will be followed by three live performances. However, rather than performances from members of the Tse Tse Fly collective, for the LIVE event Tse Tse Fly have invited three locally-based experimental musicians to perform: Stereocilia, Ocean Floor and SALTINGS with cellist Sophie Jackson.

Entry to the event is free and there will be a licenced bar in place.