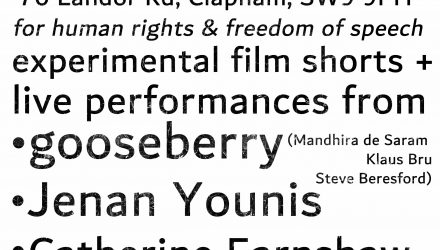 Catherine Earnshaw & storywheel – Keith Clouston (storywheel) is a distinguished composer and musician whose collaborators range from Natacha Atlas to the Royal Shakespeare Company. Catherine Earnshaw is a vocalist struck from the same mould as Shirley Collins. Keith plays the oud while Catherine contributes haunting vocals on a project that melds traditional English folk songs with Middle Eastern music sensibilities.

Jenan Younis – Jenan is a London-based comedian of Palestinian and Iraqi descent whose keenly-observed comedy has been described as a slap in the face – so don’t sit within arm’s reach. Culturally inappropriate, politically unacceptable and explosively funny.