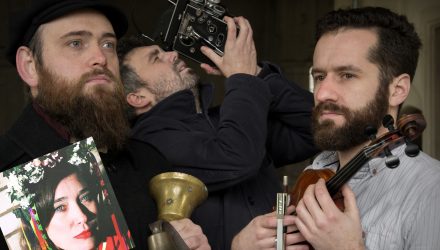 The Dead Rat Orchestra take the concept of the live film score to a new level as they tour their acclaimed score to James Holcombe’s Tyburnia. With special guest Lisa Knapp, one of the UK’s finest interpreters of song. Holcombe will perform the film live using 6 projectors and 3 screens, physically manipulating, distorting and occasionally destroying the film, creating a new ‘Directors Cut’ at each date.

A special edition CD of the score is released by Antigen Records on 13 July and the Serpentine Gallery will be publishing a book detailing Holcombe’s unique and highly researched approach to creating the film.

Shot on 8mm and 16mm film and using hand processing and historic chemical techniques Tyburnia is visually and thematically engrossing, demonstrating how, despite the gallows having long since vanished, we still stand in the shadow of it’s punitive ideology. Each event will be introduced by a regional historian adding further context. Now known internationally as Speakers Corner, for over 700 years there was a site of execution at Tyburn in London. Those who fell foul of political, religious and judicial reforms enacted by the state were executed for public entertainment and instruction.

One of the UK’s most innovative ensembles , The Dead Rat Orchestra’s music has been performed, installed and experienced across Europe, North America and the Middle East.

Lisa Knapp’s new album ‘Till April is Dead – A Garland of May’ received rave reviews ‘overflowing with warmth, light and waywardness’ ★★★★★ The Guardian and recently entered the Independent Album chart.