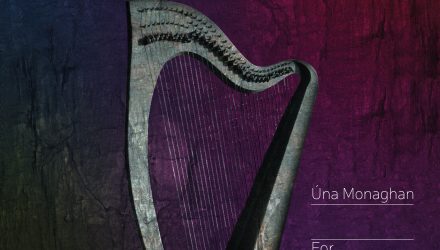 Úna Monaghan is a harper, composer, and sound artist from Belfast, Ireland. Her work has combined traditional music with bronze sculpture, sound art and movement sensors. Her compositions have been presented on BBC and RTÉ television and radio, in theatre productions, and at international festivals and conferences, such as the International Computer Music Conference, York Festival of Ideas, and Belfast Festival at Queen’s. Úna is co-founder of JamJar and Quiet Music Night, forums dedicated to performing quiet music of all genres, especially new and experimental music.

The night will begin with an excerpt from “Owenvarragh, a Belfast Circus on The Star Factory”. This is a recent production featuring multiple traditional soloists and a soundscape of field recordings, created from a book by Ciaran Carson and a 1979 score by John Cage.
After a harp + electronics set from Úna, Paddy Glackin will perform Úna’s piece for fiddle and electronics “Who Do You Play For?”, featuring text from Cathal Ó Searcaigh and Ciaran Carson.