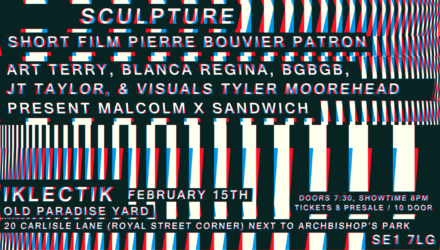 Created by Art Terry a Malcolm X Sandwich is a performance project created radio theatre which places Marcus Garvey in a former squat turned Airbnb discussing Black Nationalism’s influence on the gig economy. With vibraphone by JT Taylor, voice and electronics by Blanca Regina and BGBGB and video projection by Tyler Moorehead.

Blanca Regina is an artist, curator and tutor based in London who is currently involved in creating audiovisual performances, sound works, installations and film.
Her research and practice encompass, expanded cinema, voice, free improvisation, installations and events. She has performed with numerous artists, including Leafcutter John, etc…