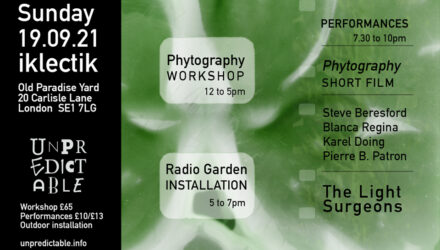 Unpredictable Series presents, on the 19th of September, a full-day program including a Phytography Workshop led by Karel Doing; ‘Sound Garden’ an outdoor sound installation and an evening program including a short film ‘Phytography’ by Karel Doing with a soundtrack by Paul Morris, plus two expanded and immersive cinema performances with Karel Doing, Blanca Regina, Steve Beresford, Pierre Bouvier Patron and ‘Atemporal’ by The Light Surgeons premiering in London.

Phytography dives into the rich and varied world of plant chemistry. This collection of organic ‘objets trouvés’ demonstrates how nature generates multiple creative solutions, each one structured intricately. Through the application of a simple chemical process, the selected leaves, petals, and stems have imprinted their own images on the film’s emulsion. Shapes, colours and rhythms whirl across the screen drawing the viewer into a world beyond language and speech. The film taps into a realm of mutualism and generosity, readily available despite the environmental havoc caused by human greed and overconsumption.

Karel Doing is an independent artist, filmmaker, and researcher currently based in Oxford, UK. “Phytography” is a method Doing developed during research focused on ecology and media, a project that is still ongoing. Phytography enables interaction between the phytochemical properties of plants and photochemical emulsion. Doing’s work has been shown worldwide in micro-cinemas, on stage, and in galleries. He regularly gives workshops in analogue film practice and is currently a lecturer in contextual studies at Ravensbourne University London. In many of his works, the rhythmical, painterly, and performative qualities of the analogue film medium are foregrounded. Kareldoing.net

Blanca Regina is an artist, musician, and independent curator based in London. Her focus is on audiovisual projects, ephemera in site-specific installations, and book arts. She is exploring the connections between archive, identity, language, and space. Her work has been supported by Ar