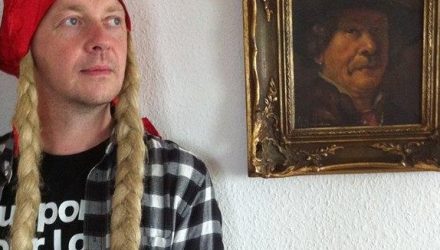 I’m a gay German artist who has been living in the UK since 1995. I grew up in a small village on the German-Dutch border, where I was constantly made aware of how to behave in society (i.e. the village). The social choices were church or sport. I did a bit of both because the worst thing you could do was to be different. It didn’t matter whether you were gay or liked talking about philosophy, dress in a funny way (outside carnival season when you must dress funny) or didn’t drink alcohol by the age of 15. Being different meant not being part of the community.
Obviously, I moved away as soon as I could and started my own way of doing things. I started to celebrate being different in my work. But then it all happened again: when I was studying music, people told me what not to do when composing. Not my teacher Chris Fox, who always supported every weird idea that I ran past him, but other lecturers, festival directors, fellow students, performers and random people with opinions. There was this obsession again that people have to tell you how to do your work and how to lead your life.
The whole legalising gay marriage debate was filled with straight people telling gay people that they shouldn’t have what they have. And now in a pre-Brexit society inclusion is something that we suddenly have to fight for again. Wherever I turn there are people who tell you how to do things or how not to.

There are more of them than us deals with all this.