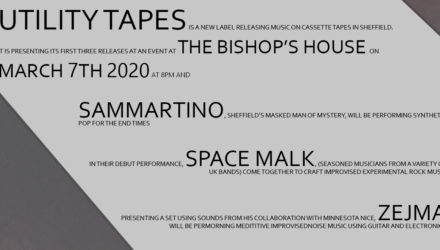 Utility Tapes
Founded by Tye Die Tapes contributors, Utility Tapes is a cassette tape label releasing left-field, outsider music. Whilst the music output of the label will be diverse it is unified by a clear visual aesthetic, eschewing bespoke album artwork for uniform packaging with slight variation. This event is the first in a series of events that will be held during 2020 and marks the release of the first three Utility Tapes (UT01-03).

Sammartino
For the past 3 years Sammartino has been studiously crafting the technology soundtrack to the Endtimes. The mysterious masked man’s latest release on Utility Tapes sees him wrangling 1980s synthesisers and unexpected acoustic elements into a reworking of 3 older songs. Expect conspiracy theories, hymn sheets and classic Sheffield synth-pop hooks.

Space Malk
Space Malk is the house band of Utility Tapes. Featuring members of Night Flowers, Acid Mass, The Silver Reserve and naisian, the trio will be bringing the rudiments of their debut album “Land of Malk and Honey” to Bishop’s House. The band’s music is created using the Asenburi method which involves long improvisation sessions (spanning many hours) which are then edited down to orthodox song lengths. The band will be performing a half hour set featuring elements of their present and upcoming releases.

Zejma
Folding layers of ambient and harsh noise, Adam Zejma will be improvising based on the upcoming collaborative release with Minnesota Nice (Ben Hinz of Drawfcraft Devices) – “Houdini King”. The performance will include samples of Minnesota Nice’s contribution.