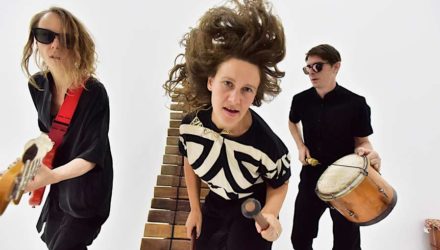 “Dance to it, make love to it, consume it, listen to it, stare at the clouds to it!” – Iggy Pop

“They were the unexpected stars of a glitzy show” – John Fordham, The Guardian (UK)

Following the acclaimed release of ‘Do Not Be Afraid’ and a busy tour that took them from UK to Europe and back, including a stellar performance at Womad captured by BBC Radio 3, Vula Viel return with a new album.

The band continue their sonic explorations around the gyil, the wooden xylophone of the Dagaare from Upper West Ghana, on their brand new set, ‘What’s Not Enough About That’.

Picking up from early 2019’s ‘Do Not Be Afraid’, the new album breaks new ground as Bex Burch (gyil), Ruth Goller (bass) and Jim Hart (drums) continue to forge their own unique fusions. While ‘Do Not Be Afraid’ developed ideas around disciplined ‘rhythm wheels’, rhythm patterns in regular cycles set to the band’s angular instrumentation, the new tracks stretch out the band’s sound, at times delicate and at others moving into raw post punk soundscapes.

Extensive touring brought the band from London’s most revered alternative venues such as Café Oto and Vortex Jazz Club to the stages of Cheltenham Jazz Festival and WOMAD, the British countryside plus our mainland European dates including Moers Festival, Bezau Beatz, Willisau Jazz Festival and Artist in Focus at Music Meeting, to take the Vula Viel sound to Germany, Austria, France, Switzerland and the Netherlands in Europe for a string of packed jazz festivals – a busy year that cemented the unity of the trio and nurtured their artistic growth.

Thanks to PRS Foundation and Sound and Music’s New Voices for making this work possible.