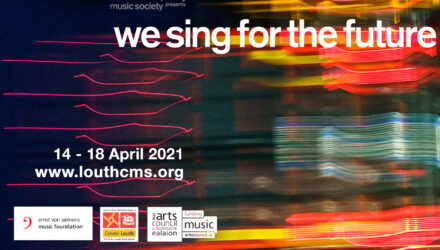 The festival for new music shares luminous, inventive work of the highest level in its online offering for 2021

From Wednesday 14 April to Sunday 18 April, the Louth Contemporary Music Society will stream seven free-to-view videos and performances from its website for the first time in the festival’s history:

● Composer Sarah Hennies’ ‘Contralto’ is a one-hour work for video, strings, and percussion that exists in between the spaces of experimental music and documentary. The piece features a cast of transgender women speaking, singing, and performing vocal exercises accompanied by a dense and varied musical score that includes a variety of conventional and “non-musical” approaches to sound-making. 8pm, Wednesday 14 April

● Guitarist and composer Fredrik Rasten and his ensemble present Rasten’s gently compelling ‘Six Moving Guitars’, a visually charming piece for video that looks at the unity of choreography and sound. 8pm, Thursday 15 April

● The Harmonic Space Orchestra performs Marc Sabat’s ‘Gioseffo Zarlino’, an entrancing piece that unfolds cyclically, weaving voices into a fabric of strings, harp, and flute in a way that reworks sixteenth-century musical theory for our century and captures the spirit of restless innovation put forth by Gioseffo Zarlino and other renaissance theorists. 8pm, Friday 16 April

● The world premiere of a new work, ‘Lenguas de Fuego’ (Tongues of Fire), promises fascination and utter excitement from the Irish composer, Kevin Volans. This adventurous piece will be performed by a string quartet with flute and percussion. 5pm, Saturday 17 April

● The festival will then close on a Cuban-inspired note, in an evening dedicated to guitarist-composer Leo Brouwer and his Caribbean modernism. Guitarist Andrey Lebedev and cellist Cecilia Bignall will first play a selection of Brouwer’s music from London’s Cafe OTO, including the astonishing ‘Ciudad de las Columnas’. Then, from Drogheda in Ireland, guitarist Alec O’Leary and his guitar quartet will present the world premiere of Brouwer’s ‘Irish Landscape with Rain’. 8pm Sunday 18 April