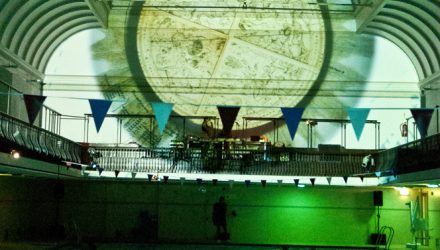 Sound
Dive into it
Dive deep

Underwater concert 8ch audio above and below the water surface, which becomes a threshold between two different soundscapes two entirely different listening experiences you move between them for a breath of air.

Underwater, despite being in a public space, the
audience member feels the intimacy of the womb-like
environment maintained by the weightlessness of the
body in water and the special immersive properties of
sound in water. Sound travels 4.5 times quicker in water
than in air. Here, like in the womb, sound is perceived
by bone conduction, by the inner ear, giving the
impression of it being produced inside the listener’s
head rather than through speakers. This space of the
personal and intimate within the public realm is
ephemeral, as long as a breath of air. Bracketed by
biological limitations, it interrogates the fleeting
moments of personal introspection and the surreal realm of the intimate fantastical.
Wet Sounds creates oppositional fields of meaning, accentuating the psychic border
between the public and social space and the interior subjective space of the listener. The
listener’s freedom of movement between the two spaces disturbs the boundary between
reality and fiction at odds with the known utility and architecture of the swimming pool. The
listener’s gestures and movement are therefore an auto-compositional acts, which in
themselves, become the focus of the experience