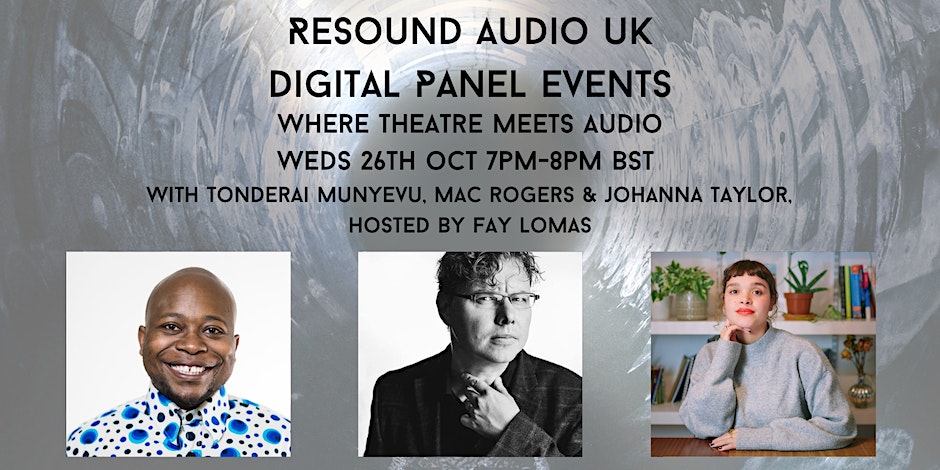 What does it mean to create a live show from an audio drama, and vice versa? What are the challenges in these translations between forms – and what are the possibilities? How can theatre and audio communities work together? How do the artists working across both audio and theatre navigate these two worlds?

Hosted by audio and theatre director Fay Lomas (BENEATH OUR FEET) with the following panellists:

Tonderai’s play MUGABE, MY DAD AND ME premiered in 2021 at York Theatre Royal with ETT, and garnered 4 and 5 star reviews. It transferred to London’s Brixton House. It is also available in audio form on Audible. As well as comedy and drama, Tonderai has written prose including BULLETS (Black/Gay in UK Anthology) and THE VISITING HOURS (Johannesburg Book Of Reviews) He is a salaried playwright for Stockroom. MUGABE, MY DAD AND ME was shortlisted for The Alfred Fagon Award 2019, nominated for UK Theatre Awards 2022 for Best New Play, nominated for Antonyo Award.

Mac Rogers is a playwright and audio dramatist. His podcast thrillers THE MESSAGE, LIFEAFTER, STEAL THE STARS, GIVE ME AWAY, and GOD OF OBSIDIAN have been downloaded a combined 12 million times. THE HONEYCOMB TRILOGY, Mac’s scifi epic for the stage, earned three Critics Picks in the New York Times.

Johanna is a London-based producer working in theatre and audio. With her company, No Stone Theatre, she created podcast SEEDS, which was Podcast pick of the week – The Guardian & The Sunday Times. She has worked with world class organisations including Dance4, Birmingham Repertory Theatre, Arts Council England, City of London Corporation, Barbican, Museum of London, London Symphony Orchestra, Guildhall School, Improbable Theatre, The Yard, The Young Vic and Selina Thompson Ltd. As Senior Producer at VAULT Creative Arts, Johanna produces their flagship event, VAULT Festival.