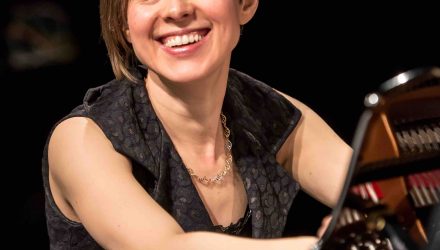 The innovative pianist performs meticulously crafted works by living composers side by side with the great keyboard masters of the Baroque and 20th Century.
Mysterious, dark or playful in turn, each piece offers a glimpse of a different world.

Described as “outstanding” (Tempo), “stunning” (Wales Arts Review), “ravishing” (Pizzicato) and “remarkably sensuous” (New Zealand Herald), pianist Xenia Pestova’s performances and recordings have earned her a reputation as a leading interpreter of uncompromising repertoire of her generation.
Pestova’s commitment and dedication to promoting music by living composers led her to commission dozens of new works and collaborate with major innovators in contemporary music.
Her widely acclaimed recordings of core piano duo works of the Twentieth Century by John Cage and Karlheinz Stockhausen are available on four CDs for Naxos Records.
Her evocative solo debut of premiere recordings for the Innova label titled “Shadow Piano” was described as a “terrific album of dark, probing music” by the Chicago Reader.
Currently, she is the Director of Performance at the University of Nottingham.