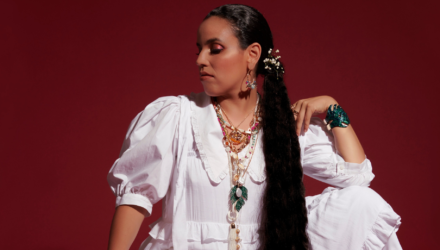 Visionary singer and music maker Xenia Rubinos dips in and out of genre and structure to create movingly powerful songs with her signature sound. Xenia’s powerhouse vocals are at the centre of her music which grows from a wide range of influences from R&B to Hip-Hop to jazz all delivered with a soulful punk aura.

The song ‘Una Rosa’ has been with Xenia Rubinos all her life. As a little girl, it would emanate from a wind-up music lamp in her abuelita’s room, its fiber optic lights lulling her into a trance with swirling colours. That song—and the lamp that first played it back to her—is the centerpiece of Rubinos’ latest LP, also titled Una Rosa; a feature-length opus chronicling a triumph over internal struggle, built around a hymn passed down from the ancestors.

‘The image of that lamp carries so much meaning for me,’ she says. ‘It’s dreamy, futuristic, nostalgic, melancholy, over the top. It’s the perfect image for the music I’m making right now.’ That music is somewhat of a departure from her earlier work, in that it’s very much ‘in the box’; rather than striving for pitch-perfect vocal takes and tight live instrumentation, she cut most of her vocals in a single take, writing and recording everything right on the spot and refining them after the fact. It’s the most electronic music she’s ever made, yet also the most spontaneous, the product of her ‘first mind,’ the thoughts on the tip of her tongue.

Co-presented by Bird on the Wire.