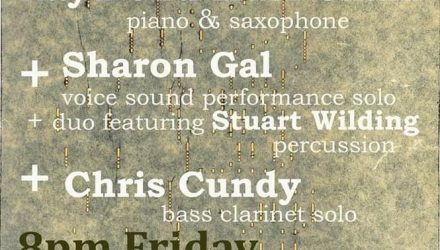 Alexander Hawkins is a composer, pianist, organist, and bandleader who is ‘unlike anything else in modern creative music’ (Ni Kantu) and whose recent work has reached a ‘dazzling new apex’ (Downbeat). A largely self-taught improviser, he works in a vast array of creative contexts. His own highly distinctive soundworld is forged through the search to reconcile both his love of free improvisation and profound fascination with composition and structure.

Raymond MacDonald is a saxophonist, composer and academic whose work explores the boundaries and ambiguities between what is conventionally seen as improvisation and composition. Much of his recent performing work has been in collaborative free improvisation contexts, however his roots in jazz and pop music are always evident in his playing and writing. MacDonald collaborates widely and has worked with visual artists, dancers, writers and filmmakers and has produced music for film, television, theatre and the concert hall.
http://www.alexanderhawkinsmusic.com/index.html
http://raymondmacdonald.co.uk/