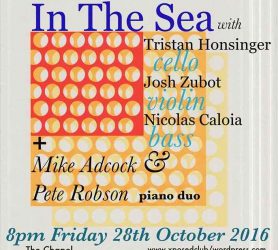 Tristan Honsinger/Josh Zubot/ Nicolas Caloia Tristan Honsinger started improvising in Montreal more than forty years ago, prior to his decisive move to Europe, where he’s been at the centre of improvised music activity ever since. So this group represents an oblique sort of homecoming. Their rapport is obvious, the results a satisfying mixture of musical empathy and creative conflict. Tristan plays with characteristic daring from his reserves of readymade tune fragments and shards of poetry and into the protean unknown that is the foundation for the best group improvising. Josh Zubot,and Nicolas Caloia don’t merely follow him there, but provoke him – and each other – in ways that are, by turns, subtle, assertive, and irreverent. A superb encounter. http:// www.nicolascaloia.net/inthesea.html + Mike Adcock and Pete Robson piano duo. These two Xposed Club favourires are up to their tricks again this time using just the two pianos. I will believe that when I see it! Mike will also be performing solo and this is what he says: ‘In 1924 Erik Satie composed what is thought to be the first ever film soundtrack, for René Clair’s film Entr’acte. Reflecting the zany spirit of Parisian Dada the film features a number of the movement’s protagonists including Marcel Duchamp, Man Ray and Francis Picabia, as well as Satie himself. The music, with its modular form and repetitive themes anticipates the work of minimalists such as Reich and Glass half a century later and to mark the 150th anniversary of Satie’s birth Mike Adcock has created a midi realization of the orchestral score which will be presented with the short film at Xposed Club.’ Mike http://mikeadcock.com/