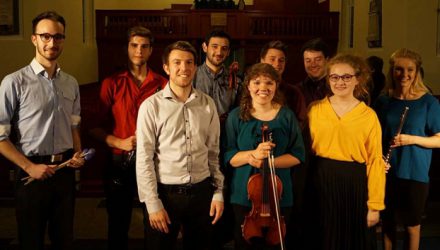 Anna Clyne’s new work sets a playful rhythm to a recording of John Cage – ‘I love sounds just as they are’. Remembering David Bowie, LME will premiere Bye Bye Spaceboy, a Late Music commission from David Power. LME also pays tribute to Sir Peter Maxwell Davies with an improvisation on his puzzle canon. In between is a topical – and potentially subversive – piece by John White, who turns 80 this year.

Audience participation will be a feature of the second half. Text scores by Jennifer Walshe, Eva-Maria Houben and Mieko Shiomi contemplate the edges of sound/silence and separation/connection.

The large-scale piece to finish – a signature of LME concerts – is by Julius Eastman, an African-American composer, pianist, vocalist and dancer known for his celebrated recording of Maxwell Davies’ Eight Songs for a Mad King. Sadly, a recording is all that remains of Eastman’s Stay On It. Using a transcription by Paul Pinto, LME will reconstruct this heartfelt and joyous piece, which opens with an infectious riff and leads to group singing and wild improvisations.