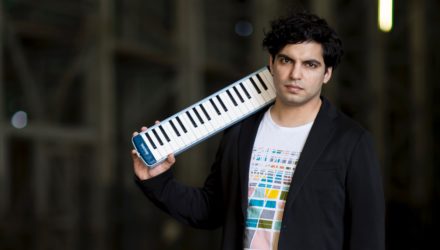 Innovative pianist Zubin Kanga returns to City with a programme of new works for piano and multimedia, exploring a range of screen cultures, from film to video art to internet culture.

Anyone can get involved in composing the work by visiting WIKI-PIANO.NET

The concert also features a new work by British composer, Claudia Molitor, who uses film of her own hands to explore the composer’s role as puppet master with a constantly evolving relationship between the performer and the notation handwritten on screen. Dutch composer, Michel van der Aa’s Transit combines film and music to explore the loneliness and paranoia of an elderly man trapped in his own home. And Adam de la Cour builds on the success of his horror-inspired work Transplant the Movie! with this sequel, riffing off genre tropes of 1980s action and spy movies, featuring an assassin using a cover as a cocktail pianist to infiltrate the evil Steinway Clan.