In recent years, we have all witnessed much political and social unrest in the UK. Austerity, Brexit, a struggling NHS and rising rates of homelessness have led to widespread concern and uncertainty. During this time I have questioned how best to contribute to the issues, and if I could be doing more. And at times I have perhaps undervalued my ability as a composer to positively impact these situations and not fully considered the connection and empathy that can be found in music. Therefore, for the purposes of this article, I thought it would be worth taking the time to reflect on experiences I have had in which I have seen my work as a composer have a positive effect in relation to social issues. This is not to say that I feel all composition should actively seek to work in this way, just that I have found myself moving in this direction.

When at a concert or performance, we are often listening in a much more open way than we do in our everyday lives.  We can take the time to really hear what is being communicated. The many distractions we usually have around us are reduced and we can give the work and ideas a greater level of attention. This can be incredibly powerful when a work is exploring a social issue or concern as already-known issues are approached with more consideration, an open-mind and potentially greater empathy. For example, in music theatre or operatic works it is fascinating to see how audiences connect to characters that would be heavily judged in the media. We take the time to understand the contradictions, behaviour and choices of characters – including those that are perceived less moral or less amenable. And music often encourages us to do this, as it can often highlight a character’s internal world. The words or actions a character may do might be completely different to their internal world, hinted at by the music, and it is this that causes us to consider what it might like to be that character. As a result, music encourages us to actively empathise with characters.

The first experience I would like to share is a project with Birmingham Opera Company, “Second Chance”. My response to the theme was to consider the situations in which someone believed they were not worthy of a second chance and consequently decided to explore homelessness, resulting in the a mini-opera piece “That’s Just Life Isn’t It?”. In the early stages of working on the piece I spent some time with The Choir with No Name in Birmingham (a choir supporting those who are currently or who have experienced homelessness: https://www.choirwithnoname.org/choirs/birmingham-choir ) and listened to their experiences. My time there made me acutely aware that homelessness is not simply about just needing a house and that there are often many more factors involved, something I tried to allude to when writing the piece. During the rehearsal period I noticed that other composers on the project, singers and musicians discussed issues surrounding homelessness and the existing stereotypes of homeless people, which for me meant the work had already had some positive impact.

Earlier I discussed how the level of attention increases when at a concert or performance, and this piece was a strong example of that. It is an everyday occurrence to walk past someone who is homeless, and for that person to only have your attention for a matter of seconds. My work “That’s just life isn’t it?” is relatively short, with a duration of 5 minutes, but that is a much longer time period than is usually given to someone who is homeless. Following the performances, I had many conversations with people which demonstrated that they had become attached to this character and had attempted to understand him in some way. There had been time to consider who he was, why he was in this position and what his future might be. For me, it was a powerful experience of what music can achieve and the ways in which it can challenge the preconceptions that exist within society.

The second experience I would like to share is of a work-in-progress performance of “The Girl Behind the Glass”. Currently being developed further, the work is a piece of music theatre exploring recovery following sexual assault. During this work-in-progress performance I was unsure as to how the audience would react and what their feedback would be. The piece is comprised of many scenes, some exploring self-denial and shame and others drawing on societal and media responses to sexual assault. The feedback that I found most surprising was from a number of male audience members, who shared how seeing the piece had caused them “to look at the issue from a different perspective” or “to rethink how they would treat someone in this situation [should that occur]”. These sentiments were very significant, as they demonstrated that seeing the piece not only had encouraged audience members to be more empathetic towards people dealing with related issues but to change how they would approach this issue should they encounter it. I had not anticipated these types of responses and it has certainly impacted on how I will continue to develop the piece, and how I view but my future work as a composer (for more information on the work:  https://rsvporg.co.uk/blog/the-girl-behind-the-glass/ ).

Both these experiences have shown me that it is possible to make a contribution as a composer to the issues within society, should I want to.  That music can be used to reframe a variety of issues and as such offers people an opportunity to look at situations from a different perspective, with greater attention and empathy. 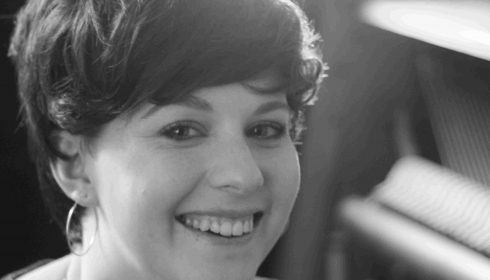 Beyond March 2018… – Editorial by Chloe Knibbs

Beyond March 2018… Chloe Knibbs March 2018, National Women’s Month, is sure to include many exciting events, performances and talks…

Am I a “female composer”? – Editorial by Chloe Knibbs

This month we welcome the exceptionally talented composer and singer-songwriter Chloe Knibbs as The Sampler’s Guest Editor! Chloe Knibbs is…