Part 1: Touching The Sound In Darkness: a listening Body: – my father Lewis Jones My father Lewis’ first job in the early 1950’s was as a telephonist on a telephone exchange, where he manually connected wires to a switchboard, to enable conversations to take place. It was typical employment for a totally blind person people at the time, and my father’s clear resonant voice and nimble fingers, used to reading braille, probably got him the job. On a very early film made in 1962 about my father and his 2 blind brothers, I see him working at the telephone exchange in Nottingham and using an ‘in ear’ telephone receiver. This earpiece rather like a head-phone, enabled him to receive communication, to separate one call from another, and do all that with little interruption to fellow telephone operators. It all looked pretty uncomfortable, by today’s standards, but his body language told me that he was perfectly at home. Throughout his life he had 3 prize possessions; his radio, his white cane and his own personal headphones, and he’d never be without the three.

I don’t know much about the history of headphones, but know they are part of a vast and profitable industry, it is estimated that 1.5 billion headphones were sold in the last 5 years, and 368 million in 2017 alone, which is quite extraordinary.  (www.statista.com/statistics/327000/worldwide-sales-headphones-headsets/).

It is clear that headphones provide a vital conduit for control, and for focusing on what we want to hear, shutting out what we don’t want, cutting off from the world, and equally protecting others from our choices in public spaces or at home. I use headphones to get more subtlety, even hear what otherwise would be inaudible, without expensive state of the art speakers that is, and this is how my father and I used them to communicate. It was possible for him to feel and hear sub-bass sounds and tune into the timbre of my voice and in the process of location recording binaurally and listening through headphones, he was able to pick up sounds that he couldn’t hear with the naked human ear. My father lost a significant amount of his hearing when he was 35, and wore 2 hearing aids from that time on – he was losing it anyway because of Noris disease the hereditary condition he, his brothers and I have, but one day he was in a phone box and a very loud screech came out of the blue down the receiver. Such was the volume, he was frightened, and later he and I realized that the noise had taken out the top end register of his hearing. After that he was registered as a deafblind man, it was awful. He said that being totally blind was a gift as it gave him access to an ever expanding world inside, but losing his hearing was very hard to bear because it was isolating.

There is nothing he liked more than conversation. However with mutual adjustment and headphones, he could hear the radio too, and in 1992 I could even amplify my speech to higher quality than a loop system, using my sony professional recorder and headphones with the tape on pause as a preamp. The key thing was that he never lost his sensitivity to tone, he had been a singer, and of course I am too, we both hated it when people shouted or when a voice was harsh or monotone. He’d come from the mountains of mid Wales, where the accent was soft and lyrical, so it was vital that I could communicate as a singer would do with him, the simple pre amp and headphones enabled me to do this. When working in artistic collaboration, we could also communicate ideas in a group like this.

In 1999 at the age of 81 he moved to a warden aided flat and had control over his own money for the first time. Pretty much straight away he graduated to his dream, 2 pairs of top quality Sennheiser wireless headphones, we researched and bought them together, while one was in use the other was on charge and he wore them every day all day. With the extra aid of a small hand designed amplifier made by Andy Jack one of his old computer science colleagues at Nottingham University, he heard instruments and textures in the music that he hadn’t heard for 40 years. The wireless medium allowed him to move about his flat, and switch effortlessly between sources, using a small button device on his chair set up by my husband Geoffrey, another computer scientist; Welsh radio, radio 4, Bach his favorite composer, and early music, talking books, conversations and whatever location recordings I brought back for him on my laptop were accessible. These were 3 golden years.

On September 1st 2012 his family met in Wales – around 250 of them in celebration of 1000 years living and working on a particular piece of land in Dinas Mauddwy. Lewis was at that stage the family elder, he’d been a big part of the plans for this momentous moment in family history, but although he tried to get up, his body failed him and he was unable to go. He had only a few hours to live. I went there instead, using my sony recorder, stereo mic and binaural microphones to bring something of the occasion home to him. On arrival there, the richness of the atmosphere, and the love they felt for him was palpable and I set out to bring his family, their music, nature and environment into his warden aided flat. I returned, and on September 3rd, when his vital systems were in the process of shutting down. He could still hear, and using those headphones, we listened to the personal messages to him in his mother tongue, sounds of the celebratory hubbub, singing, laughter, reminiscence over photographs, the welsh harp, and the sound of the river flowing from the mountain at his birthplace which I recorded binaurally. We were there quietly in the landscape together with our headphones on. Despite, tremendous pain at the end, he was very much alive in that listening, and at the moment of death it was as though he were a child being called in from play.

Lewis, died on September 3rd 2012, and although profoundly disabled in his last 3 years, he continued to deeply enact the connection between his wellbeing and the contact with his family, his friends, music and the world. My father lived in such a way that allowed his mind and universe to expand.

The wireless headphones and his passion for sharing my soundart practice, liberated us to connect creatively even right at the end of his life. I was a child carer, and very tuned into the social model of disability from the start, I couldn’t help but see the obstacles out there in the world, and it made me angry. However, in that creative space, my father and I didn’t have to get bogged down with such trials and difficulties, and of a disabling world, nor at end of life with his physical challenges and failing health, instead we were inventing; and all we saw was live potential. 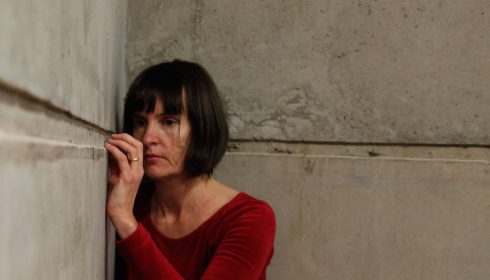 Sound is Matter Singing Part 2: Touching The Sound In Darkness by Dallas Simpson Photograph: Helen Simpson The perceptual and…

Isabel Jones – February Playlist Looking for something new, fresh and exciting to listen to this month? Look no further!…

Kicking things off for February, this month we’ve asked our talented Guest Editor Isabel Jones to share her top 4…

This month we welcome the exceptionally talented composer Isabel Jones as The Sampler’s Guest Editor! Isabel is an experienced collaborator,…