“My queerness is in the process of investigation, highlighting and presenting the ‘other’. My intention is to queer.” – Michael Wolters writes to The Sampler about the place of Queerness in his life and compositions.

When Trevor Pitt was preparing FLUID, the UK’s first festival of Queer Music in Birmingham in 2017, I suggested making something for the local LGBT+ choir Rainbow Voices and Trevor said: ”Yeah, possibly, but I’d really like to get away from it being about LGBT and focus more on Queer Music.” That was the moment when everything changed in my head: I started to understand what it is that I do, what the term “Queer Music” meant to me and how it could help me gain confidence at a time when I felt like I was disappearing. In this article, I’m sharing my very own perspective on making Queer Music and how I’ve come to realise that I had been making it for years.

One big confusion had been my assumption that “gay” and “queer” were synonymous. I realised that that wasn’t necessarily the case. A lot of people who make queer art and music would define themselves as gay, lesbian, non-binary, fluid etc, but on the other hand, I know a lot of gay artists who wouldn’t define their work as queer. Since that meeting with Trevor, I’ve realised that as a gay artist my work isn’t about being gay but about queering situations. In fact, I know now that my whole attitude to life is a queer one, which is more than a choice: it’s a strategy for surviving in this world.

This strategy has organically grown out of the way that I have come to experience the world. I grew up in a small village on the German-Dutch border in the 70s and 80s. Two distant members of my family were gay then and the laughing stock of the village. As a young child, I noticed how people talked about them, always degrading, always shaming. At school, a friend of mine came out as gay. I heard adults saying as a response that “all gays should be gassed.” When I finally knew that I was gay I was terrified. What scared me wasn’t just the insults and shaming comments, but the fact that it seemed totally ok to say such horrible things about other people. I realised that I was part of a minority. I suddenly had a different position in the world, simply because of who I was.

When AIDS hit, society didn’t hold back, calling it “gay cancer”, a “punishment” for gay men’s “unnatural behaviour.” Being gay had become more than just shameful — it had become dangerous, not only because of the virus itself but because people had become confirmed in their belief that gay men were a threat to society.

When gay marriage was publicly discussed, the media were full of people saying how unnatural it was for two men or women to get married. Even German chancellor Angela Merkel clung to not legalising same-sex marriage until 2017 because that demand had been “one step too far” for her.

There are still 72 countries in the world where same-sex sexual activity is criminalised, most of them explicitly refer to sex between men, almost half of those countries are in the Commonwealth. That makes the world a lot smaller for me. Map of LGBT criminalisation globally, by the Human Dignity Trust

And then there is that other unique thing in the life of a person who belongs to a sexual orientation minority, that moment that I dreaded like nothing else before: the “coming out” — that unbelievably nerve-racking task of “confessing” your sexual preference in front of people who usually mean a lot to you and then hoping that they won’t cry or shout or abandon you forever. For some people, it can be empowering; but for me, it was the beginning of my fear of rejection. Every time I apply for funding to do a new project or send a piece to a competition or ask for support for my work, a considerable chunk of that “coming out” fear of rejection returns.

All this gay stuff is behind my Queer art-making. All those experiences have made me feel like an “other”, an individual who is and isn’t part of society. My position is not “at the edge” or outside society, but it’s being an “other” within society.

Being gay, however, hasn’t led me to produce art about the outward expression of being gay, like Wolfgang Tillmans’ The Cock (kiss), for example. Instead, it has made me conspiratorially seek out “otherness” in things. I made up my own fabulous games as a child and found the really weird programmes on TV. As a teenager I improvised on the piano for hours, accompanied by my whole family shouting: ”Can’t you play something normal?” (I couldn’t.) I wasn’t interested in Sophocles’ play Antigone but I was fascinated by the fact that the author forgot to let the main character’s sister, Ismene, exit the stage. That poor girl has nothing to do in the play and then she didn’t even get to leave properly. So, I made a show about her. Or I got fascinated by the recorder because it’s an amazing neglected instrument that most people don’t take seriously (I once offered a well-respected composer my double album of recorder music as a present. She looked at it, laughed and said: ”Darling, I’m never going to listen to that.”)

Consequently, this otherness makes me sceptical of all rules and norms that are created by the society in which I am an “other.” The attitude that I come across a lot is: learn how to do things properly first and then you can experiment. In other words: first, you have to accept and reproduce the ways that society has decided things should be done; then eventually, if you persevere, we may allow you to do things your way. Well, I firmly believe that, alternatively, you could just do things your way from the start and pick up all the knowledge you need along the way…while you are exploring.

At the beginning of the 2012 performance of my piece Monsterwalzer the conductor (Edwin Roxburgh) enters the traditionally laid out stage accompanied by polite, sparse applause. He then leaves again only to return a few seconds later alongside players who then also disappear again. If you watch the video you’ll notice that the audience don’t quite know what to do with that situation at the beginning. That moment excites me. Some people in the audience are confused, some are intrigued. There is an otherness about this performance in this highly traditional and familiar setting and because of this otherness, you can’t trust it like you could trust the ensemble piece that had happened just before in the programme. The normal concert situation has now been queered.

Similarly, in my first big BCMG commission Neighbours for a Night (2004) I rehearsed and then sang a song together with the whole audience as part of the performance. This drastically changed the atmosphere in the hall and took the event very far away from a traditional contemporary music concert. Some people cheered, some walked out and the critics didn’t know what to do with this at all.

In 2018 I wrote a Queer Concerto for 9 Saxophones and Orchestra, where I tried out several ways of queering: I queered tonal language, Baroque music as well as the concert situation. However, like most of my works the piece isn’t explicitly about a particular aspect of being queer like Catherine Opie’s Being and Having or Felix Gonzales-Torres’ fabulous Untitled (Go-Go Dancing Platform), where he’s lifting the readymade of the dancing platform complete with dancer out of a gay club and —similar to Duchamp and his urinal— placing it in a gallery.

My queerness is in the process of investigation, highlighting and presenting the “other.” My intention is to queer. What’s important to me is that when a percussionist knocks over some instruments as a noisy fake accident in the Queer Concerto, the concert situation is no longer “normal.” Anything could now happen.

While society re-branded the word “gay” to describe something negative, we have managed to take the initially derogatory term for homosexuals, “queer”, and use it to celebrate difference and otherness. There is a celebratory joy about making art from this “other” position that I don’t get from anything else. “Queer” stands for this joy mixed with a little bit of outrageousness, rebellion and mischief. I admit that I enjoy the fact that some people might not know exactly what to do with what I present to them…it brings out that slight mischievous smile that I had on my face when my family slammed the door to the living room demanding more “normal” from me while I carried on hammering repeated chords as loud as I could on the piano.

Michael Wolters is a German/British composer and performance artist living and working in Birmingham. He is Deputy Head of Composition and Course Leader of the MMus in Experimental Performance at Royal Birmingham Conservatoire. 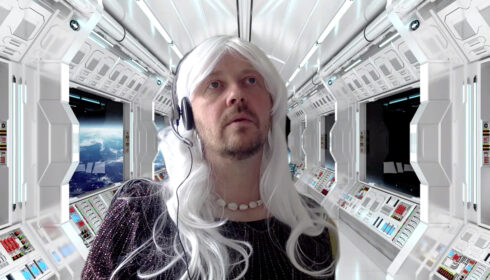 A drag queen in space looking for black holes.