Ahead of the release of his latest album ‘Music For Bosch People’, award-winning composer, improvising-trombonist and band leader Alex Paxton spoke to Birmingham Record Company about his approach to composition, improvisation, and space age neo-genitalia in the paintings of Hieronymus Bosch.

Birmingham Record Company (BRC): Tell us about the album title.

Alex Paxton (AP): “Music for something” titles make sense to me because music is abstract. But the “Bosch” word comes from Hieronymus Bosch because I often use his paintings (and Bruegel as well) as a way to describe my music to people who wouldn’t necessarily know how to get into my music. I like the idea of a big picture of everyday life, but also in Bosch you get loads of fantasy and things that look like space age neo-genitalia from the future of giant monsters the size of planets! I love the idea that making a piece of music is like building a world. Also, Music for Bosch People sounds a little bit like Music for Posh People, which is a bugbear for me about the culture of classical music. The thing about classical music, when it appears in adverts and TV programmes when it’s time to show something posh and Maggie Smith’s dressing up and stuff; I hate that bit of classical music! Posh is so charged with energy, it’s like a swear word. And rhymes are truths: so posh is bosch and bosch is posh.

BRC: So does the title track have anything to do with Bosch’s paintings?

AP: I’m not trying to describe a painting explicitly but I find paintings helpful. I find lots of painting analogies helpful for me in the process of creation. I have this very naïve mental image of a painter in their studio in her dungarees slapping paint all over the place: I wish I was doing that! I’m not, but I pretend I am, because composing looks pretty dry. But yeah Bosch’s paintings are meaningful to me but other artists occupy a lot of space in my mind when I am composing too: Jadé Fadojutimi, Ody Saban, Madge Gill, Keith Haring, Frank Bowling, Grayson Perry come to mind instantly. Maybe, more broadly I am trying to do some sound-stuff they are doing in looks-stuff. I’m trying to capture lots of things like children and laughter, joy and sex and diversity of thought and creation. I’m trying to make music that is joyful and exciting but perhaps has violent aspects as well mixed in. My favourite art and theatre and music has always had all of these things mixed together.

BRC: And how does all of this come out in the music?

AP: You could listen to this album and be like “well this music uses different types of musical language that come from different places and these languages mean a lot to some people and are attached to certain cultural references etc blah blah blah”. All of this is true and very important to acknowledge but that’s not the direct reason why those types of music are in there. The reason I use these musics (all of which I have intimate, loving (and I hope) respectful relationships with) is because they resonate with what I can only describe as a ball of abstract sensation in the centre of me, before language and thought and everything else. The trombone was my lifeline as a teenager and became almost like a partner or a boyfriend. It’s about the same height as me and has a comparable vocal range and an oral fixation. I didn’t have so much exposure to ‘contemporary music’ until I was about seventeen or eighteen but was really into Jazz-like stuffs, and the first time I felt I had a voice as a musician was playing really fucking loud blues licks with loads of grit and dirt and loud and stuff.

BRC: So how does your compositional process work?

AP: One one level I’m trying to make these kind of big “society-scapes” like Bosch and Bruegel in music on an abstract level. So working with children, working in creative music settings, developing relationships with musicians through improvising are all part of that creative process. At the same time I do write everything from a very centred “I’m the composer” mentality where everything is planned and decided, with ‘bubbles’ that are for improvisation.

BRC: Tell us more about improvisation in your music.

AP: It never makes sense to me to play the trombone in any other way, other than improvising. My improvisation is just another composition technique really. It’s all about the product and what it sounds like, and it’s another way of achieving what I want in my music. But I also respect and engage with a lot of other types of improvising as well, and I love being able to relate to other people through improvisation, and that also influences my music. There are quite a few improvised solos from other people (not just me) on this album, and I really like their voices as improvisers, their distinctiveness and creativity. But on the other hand I have a very precise idea of what the music should sound like, so I write ‘bubbles’ for them to exist in. And to use my Hieronymus Bosch metaphor: it’s like leaving a space in the picture where they can do their thing.

BRC: Is this album the culmination of a few year’s work, or were all the tracks written in a short period of time?

AP: The opening track, Music for Bosch People, is probably the most dense piece I’d ever written up to that point, and it was so much fun because I knew I could have everything. I wrote it for the recording, so I didn’t need to be pragmatic at all and could just make a totally sensuous experience. I wrote it over about a year and a half, very slowly in bits while I was working on other stuff, because it has so many fucking notes in it! Then there are five which are the original Dream Musics set, that’s: Prayer with Night Pictures, Prayer in the Darkness, Prayer with Strings and Joan Rivers, Prayer Like I Know and Prayer Like Hot Pink. They were kind of made in a batch and I made them by piling up layers of recorded improvisations on a simple little stylophone and a small cheap MIDI synth. And then I took the raw improvisations and I wrote over them with notation. And I wrote it out for this live band of drums, sax, guitar and trombone, plus some electronic and tape elements. I loved the fact that anything could come out of the speakers. And the phrase I like using is ‘infinite MIDI synths’: that’s how I conceptualise the instrument that I write for. I want to be in dialogue with real life and real sounds and real society, musicians, improvisers and also field recordings and electronic musics. I just want everything, please!

BRC: Can you describe the album in a single sentence?

‘Music For Bosch People’ by Alex Paxton is out on 23 April on Birmingham Record Company. For more information, and to pre-order, visit: https://birminghamrecordcompany.wordpress.com/2021/03/09/music-for-bosch-people/ 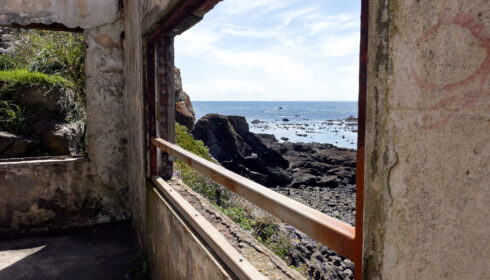 Violist Laura Sinnerton talks to Birmingham Record Company about her latest album and how collaboration is the lifeblood of musicians.