Andy Ingamells writes about his journey when composing Petting Zoo – a piece in which he manipulates the hands of Apartment House performers.

In 2014 I made a piece called Having Never Seen (a) Ghost (2014 with Jack McNeil and 2019 with Kathryn Williams). The title is inspired by James Tenney’s Having never written a note for percussion (1971), but otherwise unrelated. At the time I had never seen the film Ghost (1990), but was familiar with its famous and often parodied clay pot scene in which Patrick Swayze destroys a pot being thrown by Demi Moore by romantically caressing her hands while Unchained Melody plays in the background.

I devised a series of actions for myself that would interfere with, and eventually ruin, an otherwise conventional musical performance by an instrumentalist. The logic was that I could create different sounds, rhythms and effects by manipulating the hands of the player directly rather than by writing notes for them. I could be live on stage composing in real time, in a way that could be beautiful and interesting. I could be Patrick Swayze and the instrumentalist could be Demi Moore: I place my hands on their hands like Swayze does, and they articulate the arpeggios from Unchained Melody, persevering through the music in spite of my interventions.

It’s an unusual, possibly enjoyable, experience to touch a virtuoso’s hand while they play. You feel all the nuances of their trained muscles as they apply their expert knowledge and years of training to playing their instrument. But this performance is only a duet, and the audience are disconnected from the physical experience. I wanted to share my unusual experience with other people.

I wanted to invite an audience to approach musicians and interact with their hands, caressing, stroking, tickling, touching, exploring and manipulating them for themselves. Apartment House seemed like they might just be up for this kind of thing – and to my surprise and delight, they were (although they were keen to emphasise that the piece should not damage the instruments and should encourage gentle touching!).

But how would I invite others to be brave enough to come and touch the hands of Apartment House?

In 2017 I invited members of the public to individually conduct the Salvation Army brass band in Bristol. Responding to the gestures and movements, the band created a spontaneous piece of music with each participant which contributed to a new score, Up Down Left Right (2017).

I imagined something similar for Apartment House: inviting small groups of people into a safe space to have a personal experience with the players, so I organised a filming session inviting people to spend time in small groups with Apartment House. Up Down Left Right used the existing Salvation Army repertoire, but what music would be appropriate for Apartment House? I could have written some music myself, but my music’s already quite fragmented, so would anyone notice if it got a bit more cut up? I could have used a classical piece, but didn’t want this performance to be about the canon of Western music. Then I made another connection.

I had been petting a small French Bulldog (thinking it was a pug) for months in the communal grass outside my building, not knowing that the dog’s owner was a composer I followed on Twitter: R. A. Moulds AKA Cork Composer (his Twitter handle at the time). Moulds’ music is completely different to mine, and quite unlike anything Apartment House would usually play – so I connected with him IRL and commissioned him to write the music for me. On August 1st 2019 I wrote in my sketchbook: “Ask @corkcomposer for a piece, and use that as a basis of a piece to be manipulated, like John Baldessari’s Commissioned Paintings (1969). Tell it as a story, like: I live next door to a composer but we don’t speak. This piece is to bridge the divide. Can you also bridge a divide by touching hands?”

Moulds wrote a piece called Up the Lee Road, which I then divided up into short loops. I wrote the story of how Moulds and I met as a way of inviting people to participate in touching the hands of the musicians. It’s a shaggy dog story about music, that also involves a dog. I made video scores for the four players, and the invited audience would read the story over the shoulders of the players (written in black above the music), with instructions to manipulate the hands of the players (written beneath in red).

But the film shoot didn’t work out how I imagined. Participants struggled to read both story and instructions, and the players were very tense trying to staying together. The manipulations from the participants ended up being quite aggressive in order to be perceptible, which made it quite a confrontational—almost aggressive—experience: not what I intended. At times it resembled wrestling, whereas I wanted it to be more intimate, like Verity Standen’s Hug (2015 – video here).

Reflecting on the footage after the workshop, I discovered that the ending of each performance was where the music actually worked, and I decided to use that. I extracted and transcribed my favourite bit from these recordings, then turned it into a looped open score somewhat resembling Music for Piano 1 (1952) by John Cage. This gave 10 minutes of music, with me telling the story live onstage as a way to invite members of the audience up on stage. A bit like a lecture performance, but perhaps more like performing programme notes, or performing a text score, something I’ve tried in A performance is never rehearsed, a performance is never repeated (2010) and ***SURPRISE PERFORMANCE*** (2016), not too dissimilar to e.g. Jennifer Walshe’s The Site of an Investigation (2019). It also meant I could keep an eye on the audience members, making sure they weren’t too rough with Apartment House, which was also reassuring for the players.

R. A. Moulds wasn’t able to attend the premiere to hear his music get manipulated, so I showed him the video afterwards. What was it like to write a piece knowing that it would be used in a different way than he intended?

“I don’t think I’ve ever been possessive about anything I’ve written. I had a pretty clear idea of what was intended, and even though I did not write the piece with the idea of making it particularly poised for the sort of changes that were envisioned, I thought it best to refrain from making it as dense or as complicated as some of my pieces can be, considering the planned interaction between the audience and the performers. In fact, I was less worried about what I would do than curious about how the performers would react to being ‘interfered with,’ which seemed to me of more concern about what happened to the music. But then I am mostly used to traditional roles in performances, and perhaps Apartment House are more comfortable with such activities.”

By the time this video would be presented, touching other people’s hands while they play has gone from a little weird to downright taboo. No one could have predicted that – and maybe this piece will never be performed again, maybe we will only ever be able to hear a sanitised version of it. But in the process of composing this piece, the connections I’ve made may last a lifetime.

Andy Ingamells (@andyingamells) is a composer-performer. His work is rooted in traditional elements of music making but implemented in a different way. Score-reading, performance and improvisation often do not give way to recognisably musical material. It is a musical practice that does not privilege the sounding result, but sees it as one amongst many different and equal possibilities. Andy teaches on the new Experimental Performance course at Royal Birmingham Conservatoire, where he also researches interdisciplinary methods for documenting performances of music with integral non-sonic elements (@seeing_music) and manages Birmingham Record Company. 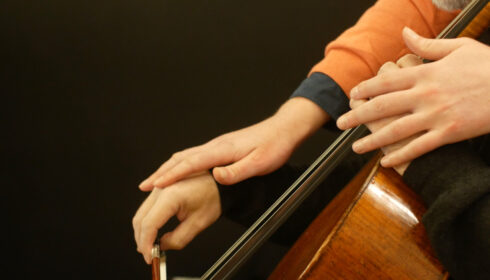 Join Sound and Music a live broadcast of Andy Ingamells’ “Petting Zoo”, in which he controls the movements of ensemble Apartment House.