ddmmyy spoke to Jennifer Walshe ahead of their performance of /AND JUMP FROM THE GOLDEN GATE BRIDGE at their debut London concert, 210416. They discussed skateboarding, Fluxus, and diversity in contemporary music. Below is an extract from the full interview, which can be found here.

You say Fluxus felt politically pertinent in the 1960s. How do you feel contemporary music situates itself politically nowadays?

I think the term ‘contemporary music’ is a really broad term. For me, if we’re talking about this, the first problem is where do we separate contemporary music out into ‘pop’ on one side, and where do we say it stops being pop and becomes ‘art’? Where do we situate artists who are at that boundary? I’m not interested in saying ‘these people are pop and they shouldn’t be art’, however people who position genres do that. Do we take free improv? Do we take noise? Do we take people with objects? Weird sound installations? Do we only take music that’s supposed to be performed in concert situations? That’s notated?

Contemporary music is interested in the idea of politics, and I’ve seen lots of festivals that take politics as a theme. But then you look at the composers that they’ve programmed and you think ‘wow, okay… they’ve programmed 40 pieces and 38 of them are by men’. So clearly, I’m seeing their political standpoint before I even listen to the music! The politics I’m interested in is not of interest to them.

The strongest piece of political music that I’ve heard in the last ten years was Mazen Kerbaj, the fantastic Lebanese trumpet player, improvising on his balcony when Israel bombed Beirut. He makes these amazing extended-technique sounds, and they’re being shattered as you hear the bombs going off. You think ‘this is what he did to keep his sanity’, going out to deal with the sonic environment as a musician. To me it’s incredibly powerful.

I’ve also heard music written by composers who are in the midst of trying to figure out their relationship to their body, gender, sexuality. Composers finally feeling like they could live in their own truth and they could write a piece and that’s a statement of how they’re opening up their life, to deal with this. That can be incredibly moving also.

What I’m most interested in is music that is written now. Outward-facing, eyes wide open to the world. Osmotic and porous, absorbing, digesting, rejecting and integrating the culture in which we live, rather than cutting itself off to write in some sort of aesthetic isolation. I’m interested in music that makes me feel alive and confused and conflicted and euphoric and terrified in this part of the 21st century, as the Earth warms past a critical degree and I willingly pay for myself to be monitored at all times by EE through my smartphone.

With regards to this male dominance of certain musics that you mentioned, how do you feel it could change sincerely? I’m thinking now not just in terms of the artists making the music but in terms of the men behind the scenes. In ‘pop’ music at the moment, a culture in which the percentage of male to female artists is much fairer balanced, there are all these horrifically disturbing stories emerging about the abusive relationship Kesha had with her producer, for example.

I think it needs to change on a variety of levels. There’s a feminist writer, Laurie Penny, and one of things she talks about is that when we’re discussing feminism we’re talking about trying to get rid of patriarchal hegemony, and doing that would benefit men as well as women. There’s a lot of male composers I know who feel they don’t fit into the scene because of reasons of class, reasons of sexuality, ethnicity, lots of people struggling with imposter syndrome. I don’t think that all the guys have it really easy. I think that everybody’s struggling with a hegemony that’s often extremely patriarchal, and both men and women are worse off under that.

I really do feel that ensembles and festivals and programmers and curators and people on juries and people who are educating – which includes you, me and everybody else – we all need to take responsibility in trying to programme more music by women, by people of colour, not just sticking to the same old names day after day. And that’s work. Most people don’t want to do that work which is understandable because we’re all really stressed people living in a precarious neo-liberal regime, we don’t have a lot of spare time. But we need to pick up the slack and not get sloppy with our programming because there’s a huge amount of great music out there and there is zero excuse for not getting our hands on it because of the web.

Another extremely important issue is making sure that the kids who are so inclined feel music is an option right from when they’re very small. If you’re a little girl you need to be told that playing the tuba is great, and if you’re a little boy you need to be told that playing the flute is great! We need to stop separating people out into gendered instruments. I was a trumpet player and the only girl in the brass section of the Irish Youth Orchestra. I was a tomboy but they gave me a pretty rough ride at times, to the extent that being a woman-composer is easy by comparison! No way near as bad! And it goes way beyond gender – if you’re a kid who doesn’t happen to be white, and every time you see an orchestra where everyone in it is white, how are you going to think “this is an option that’s available to me” when you never see someone who looks like you doing that?

We just need to be conscious instead of being defensive, which I think is often what people do because a lot of composers feel so hard done by. They feel so marginalised that if you say to them ‘maybe there’s other people who have it worse off than you’, they instantly come out swinging rather than thinking ‘maybe, yeah, I have it pretty bad but there really are others who have it worse than me, and maybe advocating for that community would make me appreciate what I have more and make me feel more part of a culture where people who have more try to advocate for people who have less.’

That would be a great political way for us to move together as a community. Think, ‘wait a second, did I really think about all the possibilities available to me when programming this gig, or did I just grab the three names I know and the name of somebody who I heard was cool in the pub.’

It was only a few weeks ago that Sound and Muisc published some statistics which revealed a lot about the lack of ethnic diversity in particular of people applying for their opportunities. Something which is worrying and does threaten this musical culture – and all fringe arts in general – is this feeling that without diversity people think that this sort of culture can’t/won’t represent them.

It’s admirable that Sound and Music are trying to talk about this and be completely transparent and open the conversation up to the community. I think that it’s very difficult for kids when they look and they don’t see somebody who looks or seems like them doing what they want to do. The biggest problem and the reason why a lot of little girls, for example, say they don’t want to play in a brass or percussion section is that it’s a very male environment, and that seems scary when you’re little.

It has been consistently demonstrated in educational settings that if you want to get kids feeling that all options truly are open to them, you have to show them people who are like them doing what they want to do. Whether it’s an Indian kid who wants to be a fashion designer, or an Afro-Caribbean kid who wants to be a circuit bending free improviser, or a kid from a working-class estate that wants to be a lawyer, all these kids need to see role models which make them feel those possibilities are open to them, that those paths are available.

Class is a huge deal. For a lot of people, new music is only accessible through the vector of a middle class education which will pay for your piano lessons on the side. Because the UK government is cutting funding for music in schools, to have a chance, kids who are musically-inclined need parents who a) have the cultural capital to think music is something worth paying for and b) have the capital capital to pay for it. And that’s a tragedy, it’s cutting so many talented kids out of the system.

The problem is there, at every level, embedded in every system, and we all need to be aware and work together. That said, I do feel hopeful about the future, because I see the new fresh energy a lot of younger composers and musicians are bringing, and how they are asking these questions and trying to work to make a better community. It’s an ongoing process, and it won’t be sorted in our lifetime, but that’s all the more reason to get working now!

210416 is this coming Thursday 21st April at The Yard Theatre in Hackney Wick. It also features music by Jürg Frey, Tim Parkinson, Jack Sheen and Laurie Tompkins, alongside the world premiere of reassigned #1 by James Saunders. Tickets are be found here. 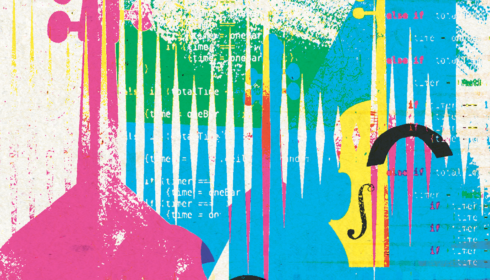