Field Recording As A Performative Act

It is early September, and I’m sitting on a boat about to leave the harbor of Portmagee for Skellig Michael, the larger the of two sharp rocks that jut out of the Atlantic Ocean, a few miles west of the Iveragh Peninsula in County Kerry. Once there we will climb the many steps to Saint Fionán’s remote monastery, claimed to have been founded in the 6th century. Rather than a recording trip, I am sailing to Skellig as part of a weeklong road trip with my boyfriend along the southwest coast of Ireland to celebrate finishing my PhD at The Sonic Arts Research Centre (SARC), Queen’s University, Belfast. I had not intended to switch my recording equipment on, but in this moment I don’t want to miss documenting our departure, and this holiday has mirrored so much of the process that I go through when making field recordings, and the wider projects they become part of.

For the last five years, these projects have formed the creative portfolio of my PhD: ‘My Words Trace a Path: Encounters with Place through Voice, Performance, and Field Recording’, which are documented online at http://www.speakingmaps.co.uk (a working title). These projects have taken me to islands, rivers, forests, borderlands and disappeared urban landscapes, all using the combination of voice, language, performance and field recording to map some of the facets of place. I predominantly do this through movement. Call them travels, drifts, misadventures, meanderings or artistic pilgrimages, these journeys unfold as recordings, words, objects and photographs, tracing the path I have taken. I’m usually much more certain of the typographies I will navigate than the sounds I want to record, and It is through embracing the void that emerges when faced with the nothingness of time and space that my work emerges. I’m starting to realise that this is why the majority of my practice traverses such remote landscapes.

But in the last year or so, I have become acutely aware of my changing attitude towards the act of field recording, and the audio I have produced through this process. I’m not sure I have ever believed my recordings to be faultless, but I no longer perceive them as accurate audio documents of the locations I have journeyed through. My recordings are instead documents of my listening, and the artistic decisions I have taken when making them. The length of time, pieces of equipment, and positions I choose to record with will undoubtedly affect the audio that is produced. For example, while we pull out of Portmagee’s harbor I am recording at the side of the boat so I catch the sizzling of the foam on the sea. However once we are moving, I step to the back of the boat to catch the rumbling and chugging of the motor. But I could have recorded beside the captain at the front of the boat, or in the middle of the other passengers to catch conversations. These would have been very different recordings. And afterwards, my decisions in the studio will filtered out, foregrounded, cut and change this soundscape further.

I also no longer see my recordings as just invisible audio files, but instead, the product of a performative act. In my opinion, field recording is a performance. From the time I start to attentively listen, to when I’m packing up my equipment, I provide a spectacle to be observed by others (both human and non-human). For example, when we reach the small concrete pier at Skellig Michael I’m approached by one of the other passengers who has obviously been watching me recording during our boat journey, and asks me what I am doing. And when recording my ascent up the many steep steps towards the monastery, I notice people trying to work out what I have in my hands. More people approach me throughout our time on Skellig, the majority of whom presume I am making a video. The fact that I’m only recording audio surprises them. Those who have spoken to me then become part of the recording themselves, but so do I. I have always been part of the recording, for it is my body standing in a particular location that holds the equipment, listens through the headphones, and presses the button’s. But in these conversations with passers-by, my voice enters as well. Therefore in field recording, I perform my body and, in these conversations
caught in-the-moment, my voice.

Lastly, since my work is formed through movement as mentioned before, I have stopped worrying about picking up this movement with my microphones. Instead, I have begun experimenting with actively recording my movement through space, and what this adds to the sonic representations of the landscapes I pass. This idea has been predominantly developed through a project that documents a week spent walking on the Isle of Harris, titled These Places Should Only Ever Be Imagined (2015). While on Harris, I made recordings of the walks I took to different parts of the island each day. These recordings, and the voicing of text written along the way create a diary style account of this time. On listening to the piece, my footsteps move through rocky, waterlogged, grassy, and sandy terrain, accompanying the other sounds present in the soundscape. This reveals changes in the landscape that might otherwise be hidden. Likewise, here on Skellig, I record my movements and pauses: the performance of my field recording.

It was through a shared concern with the above that Tullis Rennie, a fellow SARC PhD student, and I began the project Thoughts in the Field. It started as a way for Rennie and I to share the decisions, mistakes and confusions that might occur while field recording, as we started to realise they were important and creative parts of the recording process. We began sending one another Sound Diaries: short field recordings on which we verbally expose our in-the-moment thoughts and associations. As well as discussing the soundscapes that we have chosen to record, we also reflect on the process of making these recordings. For example, we discuss whether the locations were difficult to reach, if we have become disorientated and lost, and how we psychologically relate to these surroundings. These Sound Diaries have become incredibly useful when reflecting on how and why various field recording projects, and our own artistic practices, have developed and grown. And in so doing, as authors of these recordings, we perform the process of field recording.

I would like to develop these ideas so that field recording becomes part of the physical performances of my works. One idea is to set up a recording of a live performance, and later incorporate this into the performance itself. Another is to begin a piece by setting up the recording equipment directed at the audience, blurring the lines between the observed and observer, and audience and performer. For, although the recordings I have made here on Skellig are my documented observations, I myself ‘the recordist’ have been observed by my fellow passengers. They are caught in my audio, but they catch me too in their peripheral vision, indirect conversations and our direct verbal encounters. My body is not hidden in these recordings – it has made these recordings.

And now I’m off to get an ice cream. 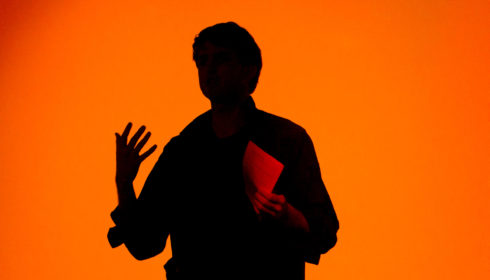 For the penultimate talk of Sound I’m Particular, Tullis Rennie will be bringing Muscle Memory to the Old Fire Station. 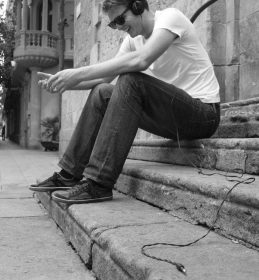