This November, SOLO is heading south of the river for an intimate set from percussionist Joby Burgess at CLF Art Café. Ahead of the gig, we caught up with him to chat about formative experiences, multi-disciplinary collaborations and following the thing that excites you.

First up, could you tell us a bit about how you came to play percussion and what it was that drew you to it?

I was a late starter percussionist, moving across from drums at around 16. Having started my music making playing rock, jazz and writing songs at the piano, my head was turned by a couple of notable experiences. First, I saw a performance of Igor Stravinsky’s Petrushka at the BBC Proms from the choir seats immediately behind the trumpets, who had those wonderful bitonal figures. The music was vivid and full of colour and I came back home and was quickly drawn down the rabbit hole of The Rite of Spring and into the music of Frank Zappa and Edgard Varèse.

The second was buying a copy of Short Cuts, a sampler CD from the now defunct Argo label, which kicked off with Graham Fitkin’s Hook – a dance music inspired workout for 4 marimbas and assorted drums. Graham and his music has been hugely important in both my development and commissioning, notably including Chain of Command – a work for xylosynth and looper inspired by speeches by George Bush and Donald Rumsfeld, and Distil for myself and the Smith Quartet, which won a RPS award in 2015.

A lot of your work revolves around commissioning new music and working directly with composers. What is it about working in this way that excites you and what do you look for when you’re seeking out new collaborators?

The collaborative conversation between myself and composers (writers or producers) is at the core of what I do and the thing that drives me to discover new sounds, techniques and challenge myself to be a better musician. As I don’t write (although ‘Why don’t you?’ is the most frequent question I am asked), this collaboration is my opportunity to input into the creative process and bring something to the table.

This maybe as little as suggesting a different instrument, perhaps something rare and relatively unknown like the Aluminium Harp, which I brought to Max Richter’s sessions for Ad Astra earlier this year or something much more closely forged, like Gabriel Prokofiev’s Fanta. This piece grew from numerous conversations and workshops over many months into the brilliant and perfectly formed piece of music it is today. Experience tells me that this process gains better results and sharing the journey from first conversation through multiple performances is always a thrill.

You often work with additional elements like electronics and visuals, especially in your pieces with Powerplant. What draws you to this kind of multi-disciplinary work and what’s it like combining acoustic instruments and electronics in performance?

I have always played around in recording studios from a fairly young age. The urge to record my performance and hear it back, multi-tracking and processing the sound is never dull! I love film and grew up at the beginning of the MTV age, so both naturally play a part in the music I choose to play and commission.

I was fortunate to work with pianist Joanna MacGregor – one of the earliest exponents of multi-disciplinary performance here in the UK – just as I started my career as a performer and have worked with Matthew Fairclough and Kathy Hinde as part of my Powerplant project since 2005. Using electronics to extend my instrument and performances as a soloist is something I will continue to explore, I think it is important to follow the thing that excites and drives you.

As well as performing in the classical world, you also work on film soundtracks, sample libraries and a whole host of other things. What effect do you think working across so many different environments has had on your work as a performer?

Well they say variety is the spice of life and I think it is equally true in the music industry. As a percussionist, I deal primarily in ‘sounds’ – finding new sounds or learning how to create them is key to my work in both the studio and on the stage. I find myself creating those sounds for both situations and then transferring them backwards and forwards.

The explosive puili sticks from Peter Gabriel’s New Blood quickly found their way into Gabriel Prokofiev’s Bass Drum Concerto and the monster cymbal stack I used on both of Christophe Beck’s Ant-Man soundtracks now takes pride of place in Iannis Xenakis’ Psappha. Keeping things fresh and exciting, always trying to develop and learn is what keeps these different environments both a possibility and a very happy place to work in.

Finally, what tracks do you currently have on repeat and what’s got you hooked on them?

Marvin Gaye – I Want You

Peter Gabriel – Come Talk To Me

Guru – No Time To Play

Branford Marsalis – Stretto From The Ghetto 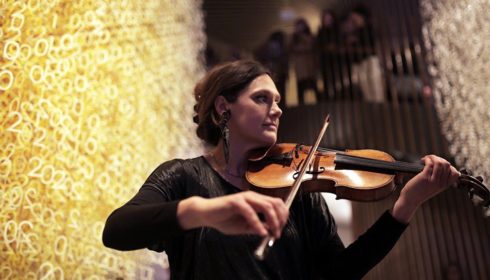 Ahead of her performance at SOLO 08, we caught up with violinist Rakhi Singh to chat about eclectic setlists, her work as a composer and the music she’s listening to at the moment